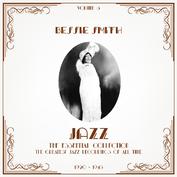 Bessie Smith was reckoned “Empress of the Blues” to Ma Rainey’s “Mother of the Blues” and they did, in fact, work together, notably in the Rabbits Foot Minstrel...

Bessie Smith was reckoned “Empress of the Blues” to Ma Rainey’s “Mother of the Blues” and they did, in fact, work together, notably in the Rabbits Foot Minstrel troupe. Then Bessie had her own Liberty Belles revue in Atlanta, Georgia, and subsequently was a leading performer in black shows on the TOBA (Theater Owners’ Booking Association) circuit. She was born in Chattanooga, Tennessee, on April 15, 1894, one of seven children, and was orphaned at about seven years of age. At first she sang in the streets for pennies before getting involved in the theatre. Bessie may have recorded for Swan/Edison in 1921 but the results were not issued; nor was a test pressing for Okeh in 1923. In the latter year, however, she began recording for Columbia and did so continuously until 1931, apparently being paid $250 per side. About 160 titles have survived and sales of her records are said to have saved Columbia from bankruptcy. This is plausible, because about 15 of her records were best-sellers and one, Downhearted Blues, is believed to have sold 780,000 in six months. Her last big seller was Nobody Knows You When You’re Down And Out (1929), not a blues but a sensitive reading of a popular song. Unlike Bessie Smith, Ma Rainey represented the folksier side of the blues and mainly preferred a raw jazz or jug band for support. However, like Bessie, she did sometimes draw on members of Fletcher Henderson’s band for accompanists and there are recordings by her with Tommy Ladnier, Joe Smith and even one with Louis Armstrong. That was more Bessie Smith territory, though, and she could be said to have brought the blues to jazz. The most successful black performing artist of the 1920s, she evidently preferred the relatively sophisticated support of contingents from Henderson’s band, most notably Henderson’s Hot Six, which had Joe Smith - no relation – on trumpet, Charlie Green on trombone, Buster Bailey on clarinet, Coleman Hawkins on tenor saxophone, Charlie Dixon on banjo and Kaiser Marshall behind the drums as well as Henderson himself at the piano. They are heard to fine effect in Cake-Walkin’ Babies and, with Jimmy Harrison replacing Green on trombone, in Muddy Water. She brought out the best in nearly all musicians with whom she worked yet seems to have had an especial musical affinity with certain trumpet players, particularly Tommy Ladnier, Louis Armstrong and, above all, Joe Smith, whom she would seem to have preferred. It is a pity she recorded with Ladnier only once, but both pieces, Dyin’ By The Hour and Foolish Man Blues, are included here. She gave a deeply felt expression, here as in most other pieces, to often banal lyrics. She recorded nine tracks with Armstrong, five of them being included here, and, not surprisingly, they have always been regarded as outstanding. On two, St Louis Blues and Reckless Blues, the other accompanist is Fred Longshaw on the harmonium. This latter instrument ensures that the music does not swing, yet the music is jazz all the same; in fact, these performances are extremely good illustrations of the fact that music does not have to swing in order to be jazz. It seems likely that Bessie Smith’s favourites, however, were performances with Joe Smith, in particular those which also include Charlie Green, as does Trombone Cholly. There are some fine performances also with just Green and a pianist – such as Dyin’ Gambler Blues and Soft Pedal Blues. Not in these cases, but in many others, the pianist is Fletcher Henderson, who seems to have been an exception to the rule that Bessie Smith usually brought out the best in her accompanists, for his playing, as elsewhere, has little character. But the opposite is the case with James P. Johnson, whose work for her possesses all the strengths of an Armstrong, Ladnier or Joe Smith. Johnson can be heard on Sweet Mistreater and Lock And Key, displaying the pianistic resource of the man who was perhaps the first jazz musician who can be described as a virtuoso. In virtually all these performances, the singer conveys a powerful dignity, leavened on occasion by an ironic sense of humour. The voice was large, beautiful, the emotional expressions naked, hence her appeal to black audiences during her own time and to countless others ever since. Yet the Depression and changing tastes had the same effect on her as on so many others, and though she had recorded regularly for Columbia from 1923 onwards, it was with decreasing frequency as that decade ended and the company dropped her in 1931. By then, the black community in particular regarded Bessie Smith as a washed-out vaudevillian, although John Hammond fixed her a last recording session in November 1933, for which she was paid $50 a title. Perhaps mindful of changes in her audience, she refused to record blues and wanted to try something less antiquated, even though her voice was now rougher as a result of gin and years of shouting the blues in theatres. She was, in one sense, right and Hammond, having employed swing musicians such as Freddie Newton and Chu Berry to accompany her, went on the following month to supervise Billie Holiday’s first recording date: a new era was beginning. Bessie Smith did a bit more touring as the 1930s wore on, obviously in more modest circumstances than in her years in the Big Time. Then she was fatally injured in a car accident in Clarksdale, Mississippi, on September 26, 1937. For several decades it was among the central legends of jazz that she had died as a result of losing too much blood after being refused admission to a hospital because she was black. It was only much later that Chris Albertson, doing research for his book, Bessie: Empress Of The Blues (New York, 1972), discovered that this story was untrue. Yet there was something apt in the fact that the most moving singer in this music should have come to a tragic end.