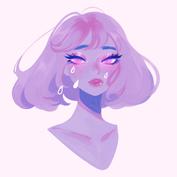 The loud streets and busy avenues drown in your thoughts. A silence from nowhere envelopes you like an angel swept down from heaven, whose soft wings bring you ...

The loud streets and busy avenues drown in your thoughts. A silence from nowhere envelopes you like an angel swept down from heaven, whose soft wings bring you into a divine rêverie. The rain-soaked and moon-stained streets turn ethereal. Entire plazas become burnished mirrors where you see yourself reflected in thousands of colorless multitudes.

Motionless, you stare into rivers of chrome that intertwine like silk into the seams of an omnipresent fabric – one from within whose creases you begin to see a goddess appear; floating in the stillness, her gossamer dress blooming slowly in the heavy air. She glares into the void as soft tears stream down her cheek like drops of mercury from a lonely star. She’s not heartbroken, but instead emotionless, lost in the feeling of numbness that comes and goes with the flux of her exquisite light. A somnolent nova whose fleeting luminosity gently caresses the city around you.

Where avenues sing serenades to lost lovers with their soft concrete voices.

Where searing alleyways birth embers of hope into abandoned hearts, and passing cars sound mellifluous whispers into the ears of idle romantics.

The goddess, with a sudden change of expression (as if waking from a long dream) becomes incorporeal once again. Warm lights fall into your arms like amber wisps embracing your return into the glass abyss. Never lost and always returning; both dim and blinding, soft and fatal.

The subtle, phosphorus kiss of a passing face in a taxi cab window.

The dim, phantom embrace of a solitary street lamp.

And little by little the city encases you like a voiceless jewel. Just a shadow, just an empty heart seeking oasis. Radiant and voiceless like a star exploding in the black-blue cold and depth of space...

Are you that lonely goddess, City Girl? Are you the palliative for time's deep and loveless shadow?