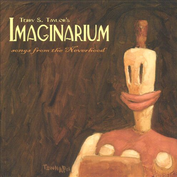 Imaginarium: Songs from the Neverhood

Imaginarium: Songs from the Neverhood is the title of a soundtrack CD released in 2004 on Stunt Records. The 2-disc collection includes 77 songs performed by Da...

Imaginarium: Songs from the Neverhood is the title of a soundtrack CD released in 2004 on Stunt Records. The 2-disc collection includes 77 songs performed by Daniel Amos frontman Terry Scott Taylor for the Douglas TenNapel created video games The Neverhood, Skullmonkeys, and Boombots. Also included are several early demos of songs that were later recorded for the video game soundtracks, as well as some songs that were left off. Also included is the theme song to the animated television pilot, Geekdad.

Musically, the Neverhood and Skullmonkeys soundtrack music follows few of the same paths as Taylor's solo or band music. It has often been described as sounding "clay-like," which was the phrase that TenNapel used when asking Taylor to create the soundtrack. The sound of distorted guitar, which is common in much of Daniel Amos' music, only makes an appearance on a couple of tracks. The lush Brian Wilson-ish productions or Folk styles of Taylor's solo albums are replaced with horns, Muppet-like vocals, clunky banjos and percussion that often sounds like it's simply falling out of its storage box. There are very few lyrics to speak of, and most of the vocals consist of little more than grunts, groans, an occasional scream and other odd noises that could not be transcribed. The booklet includes what lyrics could be deciphered, and challenges the reader to "sing along."

The soundtrack to the Neverhood has won many Awards including GMR Magazine's "Best Game Music of the Year" award. GMR specifically mentioned the song, "The Lil' Bonus Room," calling it the "funniest tune ever written for a video game." Tom Clancy's video game composer Bill Brown called the Neverhood Soundtrack, "The Best of any of them (video game soundtracks), the only music other than mine that I really like."

The album cover artwork was also created by TenNapel, and the booklet contains 10 pages of liner notes written by Taylor about the time spent making this memorable music.