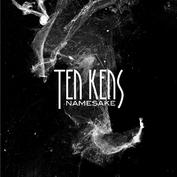 Two years after their acclaimed sophomore album, Ten Kens return with their most powerful and poignant record to date. The aptly titled ‘Namesake’ moves the ban...

Two years after their acclaimed sophomore album, Ten Kens return with their most powerful and poignant record to date. The aptly titled ‘Namesake’ moves the band away from their signature genre-bending dither, into a darkened psychedelic voyage of self-discovery.

The product of this vision is the result of an intense yearlong recording period. Masterfully engineered and produced by Ten Kens own Brett Paulin and Dan Workman, the band utilized several different recording facilities to find the perfect balance of studio wizardry and natural resonance. A purified approach to songwriting enabled the band to design a sound specific to each individual story, and as is their custom, the band disappeared into complete isolation to keep their vision focused and devoid of any outside influence. It is this insidious exploration of sound, coupled with unremitting power, that makes ‘Namesake’ such an immense and profound listen. At its core, ‘Namesake’ is the thinking man’s stoner rock - an abstract art-piece constructed from the remains of decaying genres. Without delusion and with grounded ambition, Ten Kens present an epic auditory narrative of life, death, and all the sounds in-between.

The title track “Death In The Family” sets the scene for the imminent odyssey by lulling the listener into a false sense of security using hypnotic repetition and richly layered yet hauntingly pure vocal harmonies. Once the calm is collected, it transcends into a sonic cry only to erupt at the apex into a fiery crescendo of slaughtering guitar, relentless drums, spellbinding samples and deafening bass. The effectiveness with which Ten Kens stage these songs, play with them, allow them their much needed space and still let everything fall back into pieces again, shows stylistic parallels to their golden age forefathers Bauhaus, The Pixies and Radiohead. With a newly found musical aesthetic and rich psychedelic spirit, Ten Kens forge a brave new world that is as captivating as it is reclusive.

Based in Toronto, Ten Kens is the brainchild of songwriting duo Brett Paulin and Dan Workman. Discovered by Fat Cat Records in 2006, Ten Kens became one of the first Canadian acts signed to the famed UK label. In 2012, after two celebrated releases on both Fat Cat and Last Gang Records, and several successful tours in-between, Ten Kens carry on their mission as the ever-evolving, genre-altering, sound and vision no-scene music collective.

Having built up a reputation as a fearsome live act, and having shared stages with such bands as A Place To Bury Strangers, No Age, Deerhoof, The Joy Formidable and Surfer Blood, Ten Kens are set to widen their remit for 2012 with US and European tours currently in the planning stages.