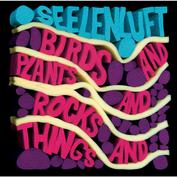 Birds and Plants and Rocks and Things

This is the fifth full-length release for Beat Solr (Seelenluft), and his first for Gigolo Records. Birds and Plants and Rocks and Things is his most ambitious...

This is the fifth full-length release for Beat Solr (Seelenluft), and his first for Gigolo Records. Birds and Plants and Rocks and Things is his most ambitious album to date, exceeding the internationally recorded and produced Out Of The Woods, the 2002 album which includes the mega hit "Manila." Solr moved from Zrich to Berlin and from Klein Records to Gigolo Records; the two independent legendary record labels that previously released his cover of American soft- rock classic, "Horse With No Name," included here. Solr has always had something special -- whether it be conducting his hard disc orchestra as Silvercity-Bob, writing music for synchronized swimming groups, creating a style of homogenized eclecticism or crossing over to the electro-pop club scene. Solr sings a bit on this record, as does the enchanting Julie Lee, but most of the vocal work is performed by Florian Horwath. Florian's charisma swings from a nonchalant disco attitude to emotional exuberance -- it's a heavenly match for the Seelenluft world of sound. Birds and Plants and Rocks and Things goes from the psychedelic to the contemplative, combining his usual harmonious style and classic pop structures with lo-fi electro, chanson, and disco. Not as club-based as his last album, and more focused than the album before that, Seelenluft presents himself as a mature but fresh, experienced song and sound aesthete who is experienced, but not a know-it-all. With its variety constantly creating a homogenous effect, Birds and Plants and Rocks and Things is a masterpiece of discipline -- a dance album for shoegazers, the living room soundtrack for club heads, the rock album for IDMers and the electro album for Sonic Youth and My Bloody Valentine fans.