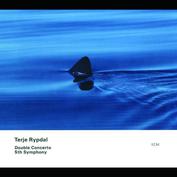 Terje Rypdal’s new recording is, in some respects, a continuation of the work documented on such albums as “Whenever I Seem To Be Far Away”, “Undisonus”, and “Q...

Terje Rypdal’s new recording is, in some respects, a continuation of the work documented on such albums as “Whenever I Seem To Be Far Away”, “Undisonus”, and “Q.E.D”. The emphasis is on Rypdal as composer. This side of Rypdal’s work has gradually been gaining ground since “Undisonus” received the “Work Of The Year” award from the Norwegian Composers Association in the mid-1980s; at the time, this was hailed by many as a signal of long overdue acceptance in Norway’s “classical” milieu.

The present recording took Rypdal and Tekro to the Baltic States. They were invited to Latvia where, it transpired, the Riga Festival Orchestra was now led by oboist and conductor Nordmunds Šne. A former pupil of Heinz Holliger’s, and now well-known for his international collaborations with Gidon Kremer, Mstitslav Rostropovich and numerous other world-class musicians, Šne was also an informed jazz listener and had followed ECM’s directions, and Rypdal’s music in particular, from the early 1970s. This turned out to be a considerable advantage. There was none of the gruelling synchronisation of time-sense so common when musicians of quite different disciplines come together. The conductor immediately felt the music’s pulse. Rypdal: “From the very first rehearsal I found it very easy to work with Nordmunds Šne. He seemed to know all the right tempo nuances, all the right fermatas and so on...”

The Double Concerto extends familar Rypdalian modus operandi. It is melodically rich and it sets the soloists – in this case two of them – against highly textured ensemble writing. It’s also one of the most playful works in the Rypdal canon. Effects for the guitars in the opening movement include motoric revving that suggests the arrival of the biker gangs who followed Le Tekro’s TNT band around in the early days. The second movement has some of the yearning quality asssociated with “Whenever I Seem To Be Far Away”, the third has Rypdal and Le Tekro in full flood against raging orchestra, while the fourth finds congruity in guitar harmonics and the bells and chimes of the orchestra percussion section.

Rypdal and Le Tekro bow out for the Fifth Symphony – a stark, and tautly focussed piece with powerful use of sound colour. It is played with passion and purposefulness by the Riga Festival Orchestra.