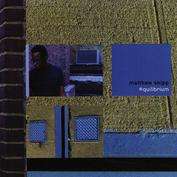 by Thom JurekHere is yet another chapter in Thirsty Ear's provocative and consistently excellent Blue Series. Equilibrium is a more complex extension of Shipp's...

by Thom JurekHere is yet another chapter in Thirsty Ear's provocative and consistently excellent Blue Series. Equilibrium is a more complex extension of Shipp's last album for the label, the stunning Nu Bop. Here, employing the talents of bassist William Parker, drummer Gerald Cleaver, vibraphonist Khan Jamal, and electronics and programming whiz FLAM, Shipp moves to extend the reach of all of his previous musical excursions by putting them all to work on a single recording. And before anyone jumps to think "mess," don't. You'd be wrong. There are nine cuts, beginning with the stellar, pointillistic title track. The ensemble creates a series of contrapuntal exercises based around an engaged series of encounters between Shipp and Jamal. Shipp's ringing right hand strikes angular phrases, yet refrains from using force. Because of the textural element present in Jamal's ornate yet dynamically restrained playing, the two instruments create a weave that is knotted by the rhythm section. "Vamp to Vibe" is just that, though it's created around a series of off-minor themes, Cleaver's drums propelling the movement of the entire piece as he double-times the band. Jamal takes the first solo, creating a staircase scalar attack from the middle of the minor progression and arcing it upward before descending into the hushed maelstrom at the middle of the track. "Nebula Theory" is virtually a chamber piece, colored extensively by Parker's wondrous use of the bow on elongated lines. "World of Blue Glass" is among the most melodically sophisticated and aesthetically gorgeous pieces Shipp has ever composed. Whatever dissonance makes its way into the piece is there for the reason of having it extended harmonically into something far more rich and, dare it be said, beautiful. The hip-hoprisy that creates the rhythmic flow of "The Root" jumbles hip-hop and downtempo, elaborated on by Cleaver, whose painting of the insides of the beat is remarkable. Shipp offers chordal explorations on a marked set of changes and Jamal moves everything into overdrive as the turntables kick in. "The Key" is positively Monk-like in its rhythmic construction and Bill Evans-like in its mysteriously enchanting melodic line. And with Parker taking a bass break that's pure, basic funky blues, it all comes together in a seamless whole. The disc closes with its most difficult and compelling piece, "Nu Matrix." It feels as if it were written for the soundtrack of Andrei Tarkovsky's film Solaris via Webern's earlier piano pieces. There are sounds adding dimension, there are no rhythms, there is only Shipp's piano extrapolating on every minor seventh chord he plays. It would be a piano solo of some starkness, but the quark strangeness of the electronics makes it a meditation on schemata and closure. Shipp, whose restless vision is never clouded by grandiosity or pretense, has become the most important pianist on the scene today. Equilibrium is soul music for the mind.